All my poems are originally handwritten in spiral notebooks. Last week I was looking through old writing notebooks and discovered many of the poems from 2000-2002 were not in the computer, the only place they can be useful. So I have begun, in the midst of all my other plans, to every day enter at least a few. It is like time travel. Entering a life so different from the one I have now, and yet recognizable. More naive in some ways, some of the same truths coming through. My children were teens and now they are grown. I wrote differently then. Most of the poems I will probably not do much more with, just for me to see. But I am compelled to have the complete set. I seems important for some reason to find something or see something for the life I am now leading. Already I have found poems I remembered and had searched for and not found, until now. And today this one, which I like a lot, a buried treasure.

A thought to go to my window
and watch as I used to.

Two deer came to feed
on seeds knocked down

by careless birds
now laying on the crust.

The deer came dark and slow
against deep white of snow,

the storm from days ago
that melted on top and refroze.

They scooped up the seeds,
and still as marble

watched and waited
for what in the moonlight?

A third form
from the other side of the fence

slowly trod one crunching step
after another.

The two stopped feeding
and went over

and slowly, with no deliberate speed,
with no apparent notice

of bare slender legs and bootless feet,
all three made their way west

toward the forest
and the western end of the fence,

And all was bright and still
under the midnight high moon. 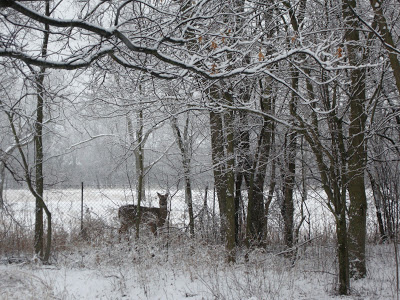