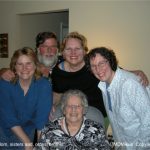 Dorothy is on the left.

It was 2014. I couldn’t quite settle on the title for a poem collection I was working on. I called my sister, Dorothy, and tried out a number of possibilities. She didn’t care for any of them. She is very honest. She asked, “Don’t you sometimes use a poem title for the book title?” I went back through all the poems in the book and came up with three choices. One in particular seemed to fit. I called my sister and she agreed. And so was named “Thrown Again into the Frazzle Machine.”

The poem is about a phone call from my gynecological surgeon with a surprise cancer diagnosis. I was alone. It was a week after a hysterectomy that had gone smoothly and lab tests had shown no cancer. But further analysis picked up endometrial cancer. Crazy. No further treatment was recommended, just “enhanced surveillance” every three months for two years. We had made a crucial decision to do the classic surgery with a 10 inch-incision, not the laparoscopic procedure. This decision meant that the unexpected cancer cells had not been spread throughout my body, but were contained in the intact uterus, which had been completely removed. I had a bit longer recovery, but no cancer. (Last month I “graduated” from the enhanced surveillance.) So this poem was in many ways a capsule of what the book was about: life’s twists and how in the end it all turns out.

How long does it take to
find the ground

to wrap the mind around
another cancer diagnosis

the choice made
one recent night

to live…still
much to do

who am I now
alone and in relation to.

Once the title was in place the cover image immediately came to mind. I had taken a series of photos the year before after a vacation in Wisconsin. We’d stayed in Sturgeon Bay and my husband discovered Popelka Trenchard Fine Art Glass Gallery. We watched a glass blowing demonstration, seeing a small vase take shape from the molten strands of glass. We bought the vase as our souvenir. Back at home I was sitting at my kitchen table looking at the intricate patterns and the sun shone down through the skylight. I was captivated by the swirling colors in the light and took a series of photos with the camera lens in the vase pointed at the bottom. One of them, “Light through Once Molten Glass,” turned out to be exactly right for the new book cover: a central vortex with light streaming through the darkness to create beauty. What had been molten blobs was skillfully shaped into a new creation we saw being “birthed.” Perfect.

What is your creativity “birth” story?